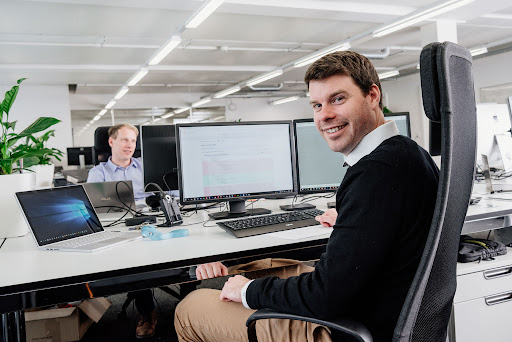 November 5, 2020
Inspired by a lifelong curiosity about how everything works—from personal computers to global infrastructure—Thomas Taroni begins and ends each day with an innovative approach to problem-solving.

It’s 7 am, and Thomas Taroni hops on a train from Freienbach, Switzerland, for a 45-minute commute to his office in Zurich. With one eye on the picturesque landscape outside his window, he taps his phone, checking emails and responding to messages. But today, just like every other day, his mind is on bigger things. How do we use technology to solve problems in a permanent and universal way?

Thomas is the co-founder and CEO of Phoenix Systems, a revolutionary IT hardware and software consulting and development firm. His company’s mission is to create intelligent IT architectures that are modular, efficient and help clients impact the world using technologies like blockchain, big data and Internet of Things (IoT).

Bringing this bold vision to life requires a curious mind, boundless energy and an infectious creative enthusiasm that inspires others to do their best work.

The impulse to break things down to their core is embedded in Thomas’ DNA. He smiles as he tells the story of the time his aunt gave him an IBM PC when he was 10 years old. He never even turned the machine on, instead taking it apart to learn how it worked. When he received his second computer at age 12, he first used it to play games with his brother, and quickly realized he could gain an advantage by re-coding the software.

This natural curiosity drives almost every action in Thomas’ life. His childhood experience with video games and an IBM PC planted a seed of curiosity that has been with him through adulthood. Today, he still keeps the original 1983 IBM PC manual on his desk at work as a sentimental keepsake.

He arrives at Phoenix Systems headquarters by 8 am and leads a morning check-in with his staff over coffee, addressing urgent issues and setting the team’s agenda. No matter where their projects left off the day before, everyone at Phoenix knows that priorities could change at any moment. This is a reality that Thomas recognizes: the ability to pivot is crucial to Phoenix’s success.

“In the technology business, you develop and develop, but then you might see another technology that’s better than what you’re doing,” he muses. “So, you should be able to throw away your stack and create something completely new. That’s a skill you really have to have.”

As Thomas speaks, there’s an energy in the room that comes from the work culture he has built. Thomas doesn’t believe in strictly defined roles for his staff—he allows them to jump from role to role based on their strengths and what’s needed on a given project.

After some programming work and a quick lunch, he sets off for the most creative part of his day. A lifelong outdoorsman—he's been a passionate snowboarder since childhood—Thomas still finds inspiration walking out in the fresh air. And Zurich provides the perfect backdrop for him to wander, both physically and mentally. With its unique combination of natural splendor and urban life, Zurich has emerged as a major tech hub in Western Europe.

As he takes in the scenery, he talks about how this unstructured time is vital to solving seemingly intractable problems in the tech space—and for Phoenix Systems’ customers. Even a sound that Thomas hears while walking through town can be the catalyst for a breakthrough.

“It's not like you could say at 8 o'clock in the morning, ‘I'm inventing something now.’ You have to wait until your brain is ready and running. Your mind is not like a machine that can produce a new idea in 10 minutes. You have to wait. ”

But once he arrives at that breakthrough idea, he’s filled with a sense of purpose to execute on it.

Thomas heads back to the office to dig into projects. His ability to find solutions to complex problems depends on the scale and breadth of his company’s technical capabilities. But he didn’t grow these capabilities overnight.

In a way, Phoenix Systems began at a summer camp when Thomas was a kid. At the time, he’d never been online and didn’t even know what a website was, but the camp needed a solution to promote its go-cart program, so he researched and figured out how to build a website entirely on his own. That initial creative impulse grew into a career of serial entrepreneurship, including starting Phoenix Systems a decade ago.

“At the beginning, you have a website. Then you grow to 10 websites, and now you need a server. And after getting a server, you eventually need 10 servers, and then you need a data center,” he says. “And now finally you need multiple data centers. That's the way it goes. And it has begun with a simple website.”

Accomplishing this level of scale required some help from the outside. “We needed a partner with a clear approach to global scaling, who also had the machine with the most power that fit best with our architecture,” Thomas says. “And that was IBM and its IBM LinuxONE™ system.”

Thomas spends a significant amount of time in his company’s data center, which is one of the two core pillars of his business. This data center is where the scaling occurs—IBM LinuxONE provides the hardware that enables Thomas to deliver on client needs across dozens, even hundreds of countries.

“We needed a partner with a clear approach to global scaling, who also had the machine with the most power that fit best with our architecture, and that was IBM and its IBM LinuxONE system.”

“That is the most important thing for us—to be flexible on this side,” he explains. “If you have a supplier that can’t deliver a lot of hardware when you need it, that would be a problem, especially during a growth phase. With a supplier like IBM, it's not a problem, because LinuxONE makes global business feel like normal business.”

When IBM engineers arrived at Phoenix Systems, they were surprised that Thomas excitedly joined in the installation, running cables, removing old hardware and generally streamlining the process for everyone. It’s not typical to see a CEO getting his hands dirty like that, but Thomas isn’t a typical CEO.

LinuxONE was built by technologists who share Thomas’ uniquely creative approach to problem-solving, and its capabilities align with his own method of doing business in an unexpectedly productive way.

Thanks to these innovations in his data center, Thomas’ work now branches across Switzerland. In addition to running Phoenix Systems, he’s also the head of IT for SkyCell, an award-winning provider of temperature-controlled container solutions serving global pharma companies. He’s also able to tackle huge projects like Swissdox, a massive media database that makes every article ever written in Switzerland available to 220,000 citizens and students.

Thomas heads out for the train at 6 pm. He arrives home and relaxes in front of an impressive home theater system that includes a fully wired living room, complete with built-in screens. It should come as no surprise that Thomas built it himself.

Then it’s back to his projects. Just like he does during his morning commute, Thomas is always thinking ahead while he’s working late. He is a firm believer that just because something hasn’t been done yet doesn’t mean it’s impossible.

“If you work in IT, you have to think, ‘What's next?’” he says. “It's not only what you’ve developed today. You always have to be prepared for what's coming next year—or the year after that.

”Thomas knows that creating a better future will require dismantling much of what we know today to find solutions and build new game-changing technologies. And it’s his tinkering mindset—that same desire he’s had since childhood to see how everything works—that will lead change for a brighter tomorrow.